The electric (or electronic) parking brake, also known as an automatic parking brake (APB), is a function offering the driver increased comfort and convenience. In addition, as the hand lever is not used, car manufacturers have more freedom of choice as to where they site the operating parts within the car.

Features such as hill- or auto-hold are also possible with an EPB. Hill-hold stops the car rolling away accidentally when standing still or setting off. Auto-hold keeps the brake pressure applied after the driver releases the pedal. If the ABS sensors detect any movement the pressure is increased. If the accelerator is pressed (or the clutch released on a manual) the brakes are let off.

There are two main systems in use as described below; namely the cable-pull and electric-hydraulic type. Both methods include a visual warning light on the dashboard. The second of these is now the most common. A third full-electric type will start to be used in the near future. 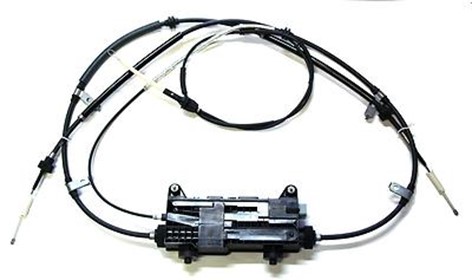 The cable pull system is simply a development of the traditional lever and cable method. As the switch is operated, a motor, or motors, pull the cable by either rolling it on a drum or using an internally threaded gear on a spiral attached to the cable. The electronic parking brake module shown as figure 1, also known as the EPB actuator, is fitted to some Range Rover and Landrover models. The parking brake can be released manually on most vehicles. After removing a plastic cover or similar, pulling a wire cable loop will let off the brake.

These types are usually employed as part of a larger control system such as an electronic stability program (ESP). 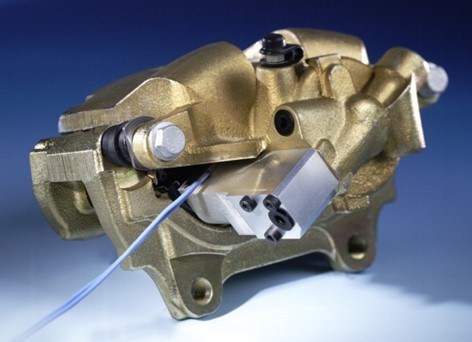 When the driver presses the switch to activate the parking brake, the ESP unit automatically generates pressure in the braking system and presses the brake pads against the disc. The calipers are then locked in position by an electrically controlled solenoid valve. The caliper remains locked without any need for hydraulic pressure. To release the brake, the ESP briefly generates pressure again, slightly more than was needed to lock the caliper, and the valve is released. This system is show as figure 2.

The drive-by-wire system shown in figure 3 was developed by Continental. It uses an electric motor (3) and gearbox to apply pressure on the pads and therefore on to the disc (7). A key component is the parking brake latch. This is like a ratchet and it prevents the pressure in the piston from rotating the motor – and it therefore keeps the brakes applied. 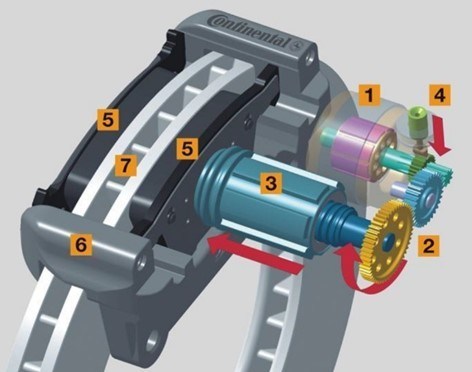 The diagram shown as figure 4 is a generic layout of an EPB system. It is from a company known as Allegro Micro Systems and they provide a wide range of motor driver, power management, and Hall-effect sensor ICs. 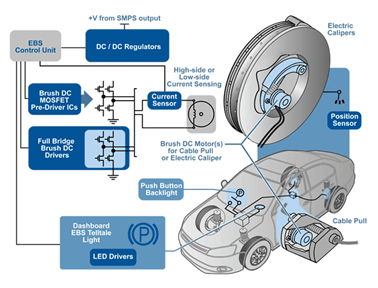 Like all other similar layouts, the electric parking brake system has inputs and outputs. The control switch and wheel position sensors being the main inputs but also shown in figure 4 is a current sensor in the motor supply. This allows monitoring of motor performance and torque. The outputs are the motor and a warning lamp. On most systems there will also be a diagnostic output for reading by a scan tool either directly or via the CAN bus.

Testing the parking brake on rollers is possible on both systems. Cable pull types can be tested much like ordinary hand or parking brakes. But there is a risk of locking the wheels. Some manufacturers have test modes – so double check!

The types with caliper motors can also be tested on rollers but the procedure is slightly different. Most of the caliper-motor systems (TRW for example) have special software incorporated in the ECU for brake testing. When the car is put on a rolling road and the rear wheels are driven by the test equipment, the ECU detects this as a test situation because the rear wheels are moving and the fronts are not. It therefore puts the system into test mode. If a multi-function display is used on the vehicle dashboard, it will display an appropriate message. The technician can then operate the handbrake-switch. The ECU applies the electric parking brake with enough force to obtain a reading on the roller brake tester. The wheels should not lock. After the test is complete the rollers are stopped and the switch is released. When the switch is activated again, the brakes are re-applied in the normal way and the wheels will be locked.

The key drivers for enhanced systems such as the EPB are increase functions, comfort and safety as well as greater freedom for vehicle designers.

The addition of electrical functions to the normal hydraulic caliper is currently (2013) the most common. However, brake-by-wire is just round the corner and development is unlikely to stop.

SCREWTECH is the first domestic company to achieve mass production of ball screw for new energy vehicle gearboxes. Since the installation of the first batch of complete vehicles in 2014, there is zero complaints, zero defects, and zero recalls, and it has successfully served important national events such as the G20 Hangzhou Summit. Since 2018, he has been invited to join the China Machine Tool Industry Professional Association, and has the opportunity to share valuable experience in production, R&D and management with brother companies in the industry. Brother companies in the industry fully affirmed the WKT brand's focus and perseverance on miniature ball screw.